Retro Entry No.1: Let the Learnins’ Begin with One for the Chipper

So – like I mentioned in my just-previous note – I’m gonna just randomly post stuff that’s been in my notebook from the beginning of the year.

I will call these retrospectives in learning golf or something like that – maybe kitchier.   Many are from watching the golf channel or some other show and taking notes from some pro on the Champions Learning Center or one of the swing fundamental shows with Martin Hall or somebody or just stuff from wandering the web.  Other stuff is just observation and thought processing – I seem to do that a bit.  And I may wax poetic along the way.  Makes for much better reading mixing it up this way – I figure, versus just recounting my Daily Diary – which is great for me but who else wants to read that stuff.  Of course, I’ll make edits along the way – as I seem to be doing already as I write this entry.  What’s kinda neat is

So with that – let the following series of retro-entries begin.

This creates an automatic leaning of the shaft towards the target so the front edge can really get to the ball first.  (For me, I do this in a sorta opposite way.  I keep the ball closer to the middle of my stance and open my stance slightly and set-up with my grip edged over towards my left hip like I’m pushing the club towards the target.  It looks like an odd set-up but the club grip is well ahead of the ball and I feel more comfortable that way and my take away from this position keeps my angles in place from the get go.) 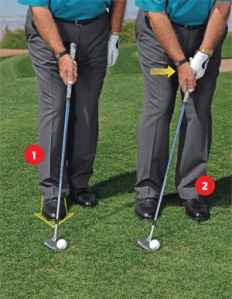 Thanks for the Future Memories, Winter Golf Practice & ZZ Top

I haven’t had a chance to write in a while what with all the holiday stuff going on.  But now that I’ve had a chance to reflect and give thanks for all the many wonderful things in my life including stumbling upon golf in earnest a couple years ago and being able to pursue it to the best of my ability and life/work balance but with deliberate seriousness and purpose over the last 12 months in particular.  All told – compared to where I was just 5 years ago, on many levels, I’m an incredibly fortunate guy.  Funny how life seems to just plod along and then suddenly it’s like it changed on a dime.

I mean, I must say that I have improved in all the areas of the game that I’ve focused on over the months – from pitching and chipping to putting most recently and mixing in other learnings about equipment and stuff and getting more regular with practice routines and even writing this diary.  It’s a ton more than I was doing oh just 18 months ago and even if the needle isn’t moving with the kind of alacrity I would want – it’s still moving in the right direction.

And I’ve got nothing but time so – Shazzam! – I’ll take it, not too shabby! and I guess I’m setting myself up to double down next year and really get serious.  Maybe I’ll even get an instructor finally – but by then I can participate in my instruction versus just being a dunce.  Paul Azinger says you need to actively ask for help from your instructor otherwise they won’t know how to guide you.

So there are a couple of things I’m thinking about and need to say.  One is, even though we’re in the rainy season  – and thank goodness we’re getting a good dousing right now in the San Francisco Bay area  – the weather is temperate enough for me to still squeeze in putting practice (and eventually driving range and instructor) thru the winter.  Even so, the sun light is scarce so I’m finding myself reverting to at-home off-range practice routines.  There are a ton of things I can do in the backyard especially for my short game like using a chipping matt and chipping net and stuff.

I just bought a 3-hole chipping net from SKILZ that I put out in the backyard some 15 yards from a practice mat with 2-level grass and practice really short chips or imaginary bump-and-runs from that distance.  My mat has alignment lines so I can practice getting into the right stance and adjust my posture and foot positions based on how I’m missing the batter’s box of the chipping net.  I find this one is better than just the regular round chipping net with a bull’s eye center.  Having a net hole dead-center and then 1 panned left and right within a square box like this SKILZ one does (and I’m NOT trying to push this brand or anything but I’m just sayin’), let’s you think like a pitcher or a basketball player at the foul-shot line.  You can make your adjustments based on how and where you missed.  It’s uncanny how I can dial into the right club face angle, foot position and all after about 6 billion tries.  Oh – and I use the spongy balls or whiffle balls instead of real golf balls so I do take out my neighbors or my windows – right?  Just a friendly neighborhood golfer tip for anyone looking for cheap backyard practice drills.  After a few dozen sunsets of that, you might feel like the sun is shining so bright that you’ll need a pair of “Cheap Sun Glasses” – haha, that’s for all you ZZ Top fans out there.

Two, I realized I have a ton of blog entries from earlier this year and I started panning thru them.  Silly me, I often write random musings about golf stuff and practice into one of those composition black and white notebooks about golf when I’m commuting by light rail into work or when I’m watching golf on TV – and often the writings will make their way onto WordPress but often not.  So I have a couple dozen entries that I’ll be posting under retrospective entries over the coming days – unless I forget to do it or something.

I’ve also taken to reading more golf literature and delving into its history.  I taped a show on Arnie that I’m hoping to watch this weekend.  And I stumbled across a new golf channel (we recently switched cable providers) called the Back9 that has shows like the Wandering Golfer (which is kinda neat) and some others (some not so neat IMHO) that just makes me feel like, even though this sport is in a severe ebb due to a confluence of economic demographic and other macro-cultural factors, this game is growing new roots in more vibrant and pervasive ways – that points to an exciting future at every level.

And for that, I give a ton a thanks and thanks to you all for putting up with me.

Thanksgiving is a wonderful time to celebrate the awesome things in our lives. Many people will travel long distances to share this fun holiday with family and friends. Personally, I like Thanksgiving because of the friendships, joy and love that is passed freely among best friends, family, old acquaintances and people you have not met yet.

By reflecting quietly, we realize how grateful we are for all those who have touched our lives. Some times it is an encouraging word from a stranger, that unexpected phone call, or the wanted call from someone you are missing. I especially like a tweet I received for Chris Squires, it about sums up how I feel:

@TheGratefulGolf : US or not, we ALL have a lot to be Thankful & Grateful for…tomorrow and EVERY DAY!

I know that Thanksgiving is not solely a North American holiday. It…

I’m learning how to embed stuff from other social media and this was just to righteous – but it captures the rare fleeting feeling perfectly.

Miguel Angel Jimenez holds the first-round lead in the #TurkishAirlinesOpen with a blistering nine-under-par 63. pic.twitter.com/XnXx6vq4rI