wrist, arms, shoulders, and hips turning in sequence with a frisbee

Did some front yard practicing today with my at-home practice station. Took out my SKLZ target netting, a fairly huge contraption but easy to set up (don’t worry I don’t use real golf balls – i use the perforated plastic ones instead), and tried out my new grips and tried to focus on some backswing drills that work on the CASH principle of trying to move/turn the clubhead (in other words – the wrists) first, then the arms then the shoulders and then the hips.

I did a few swings slow motion but it was hard to think it through on a normal swing and I started to get all jumbled.

Then I remembered a thought I had after reading something online – about the swing really being all about the left arm.  If you use the left arm to move the club instead of your right arm – you’ll have a better chance of guiding the club correctly.

That’s the thing with golf – it’s such a game of opposites – swing down to get the ball up, focus on calming your mind instead of getting all pumped up, work on being more humble instead of brandishing your ego.  When it comes to the swing – I’m figuring out it’s about using your non-dominate arm instead of getting power and control from your right arm (if you’re right handed).

So I had a little Eureka moment.  When i tried to focus on that – I came up with the thought of trying to throw a frisbee with my left hand.  I was playing with the idea that the backswing and the swing all together is more like a left-handed backhand in tennis.  I read that in one of the blogs or a magazine.  And I always heard that the swing altogether is like trying to skip a stone across a pond or similar to a pitcher throwing a baseball.  But the latter images made me focus on my right hand and action with my right wrist arm and shoulders. But when I tried to emulate throwing a frisbee with my left hand I sorta kinda really got the sensation of having to keep that left arm extended, turning my wrists at the right times and leading with my hips as I tried to shift from back to front. It was palatable and replicable and natural even if awkward.

I also got the feeling that I could also emulate the sensation of trying to hit a nail with a hammer – something you hear many pros talk about when talking about the precise nature of getting the sequence for power right…the idea that you delay the striking of the hammer until just before you hit the nail much like you need to delay the club head from swinging forward until it comes back down below your hips. The whipping sensation came about naturally when I tried to swing like I was throwing a frisbee – because the speed of the frisbee comes from delaying the flicking of the wrist until the last moment.

Anywho – the ‘throwing of the frisbee with my left hand’ seems to work conceptually for me much more so then trying to think clubhead, arms, shoulders, hips.

So my practice session was useful in that regard.  Now I’ll have to see if that sensation remains after a few more practices.  But after several weeks of feeling like I haven’t started making improvements on anything except putting, this is a glimmer of hope.

That’s golf for ya’.  Just when you start to get discouraged, she throws you a bone and you’re right back in it like its the first day. Hazzah!! 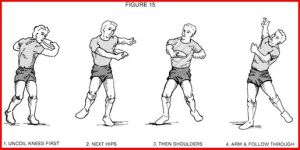